As a small and reliable classic car, the Sprite look incredibly stylish on the modern roads and it will promise a ride that feels faster than you’d think so. Given it is small in size, lightweight and quite low, it makes one of the best classic cars to be driven on the small lanes of England. With a character of its own, the Austin-Healey Sprite is one of the easiest and most affordable classic cars that you can own.

As a model that came out between 1958-196, the Austin-Healey Sprite was envisioned as a smaller model that was meant to resemble the Austin Healey 100 and 3000. The end result was a mix of components from other BMC’s cars (British Motor Corporation). Half of its structure comes from the Austin A35, with parts such as the engine, gearbox and suspension, and the other half coming from the Morris Minor. The first generation of Sprites was considered a solid line of cars, with few drawbacks, such as a bit of rust here and there, a rather fragile first gear and wear front shock absorbers.

Called the Frogeye Sprite, due to its headlamps that have a pop-up look, the car makes a great addition to any owner who wishes to ride one of the most affordable and easy to maintain classic cars. With only 1,000 MKI Frogeye Sprite still alive in the UK, it could easily be a project available for any home mechanic.

The Origins of Austin-Healey Sprite

The initial structure was quite minimalistic, featuring a boot with no opening lid and the side windows were made out of plastic. For this reason, it was harder for travellers to carry any large luggage, and any other rear-end works were quite inaccessible as well.

Moving away from its early built, later lines of Sprite received a 1098cc in 1962, a shift from the slow 948cc A Series unit. All models received some sort of improvements, with the most notable one being the MkIV receiving the tuned BMC A Series 127cc powerplant from the Mini Cooper and it also featured a proper hood. In 1969, the model would receive a last change of matt black grille and sills, slimmer bumpers and Rostyle wheel. The following year, the official name would be changed to Austin Sprite, and ‘71 marks the end of their production.

What to look for when buying one?

Almost all of the cars have been re-done and received different changes, more or less.  What makes the Sprite cars so accessible for anyone who wishes to own a simple classic car, is that you can still find all of its parts at great prices. Moss Europe has a list of available parts for these cars, and there’s plenty of help online with all sorts of questions you might have related to the functionality of the Sprite.

Engine: One of the most notable changes in the early models was the shift towards a more powerful engine. A common upgrade is the fit of larger carburettors to allow a 3-4bhp performance, but other changes are also welcomed. As for the actual engine, Sprite allows for easy engine swaps. More powerful A Series fittings are preferred and the most common one is the 1275cc unit from the MG Midget or the MKIV Sprite, which gives a 65bhp and 72lg ft. The 1098cc lump is also widely used due to its prolific production.

What to look for? Make sure the engine is in good condition. Inspect the oil, coolant and other fluids. If you notice something wrong, like excessive leaks or odd oil pressure, that could be a red flag.

Brakes: Unavailable at the beginning for the 58-61 models, the disc brakes and the wire wheels are often added. The brake disc upgrade is something that you will want to implement, especially if the engine was also upgraded. To further make it more lightweight, replacing the standard steel front clamshell for one made out of fibreglass can also be something to look into.

You should expect to pay anywhere from £5,000 to £25,000, depending on which upgrades the car had received. 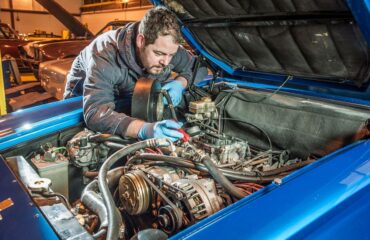